The importance of performing arts 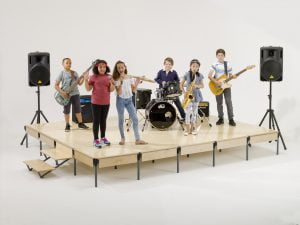 Late in 2014 the website of Stagecoach, the respected network of performing arts schools, carried the findings of a research study covering the views of 1500 parents of children involved in performing arts activities.

The results were a clarion call to all those who feel that the growing emphasis on technology in education might be endangering children’s social skills.  In an overwhelmingly positive response to the way a performing arts based education has helped their offspring, parents identified “empathy”, “imagination”, “general happiness and wellbeing” as key improvements they had seen.

It is in this context that Gratnells, the well-known provider of storage systems to schools, has chosen to introduce Gratnells Stage, an advanced modular staging system, along with a drive to encourage schools to promote all manner of performance and presentation skills.

There is an abundance of expert opinion and published research which supports their campaign.  For example, Professor Maggie Kinloch, author of “The importance of Theatre and Performance to the Development of the Child”, is among many arguing the case for creative expression with a long list of its benefits, including the development of language and communications skills, stimulation of their creativity and developing their ability to understand.

Murray Hudson, MD of Gratnells, says the company’s expansion into the world of performing arts is a natural extension of its existing business.  “Our products facilitate children’s access to a wealth of educational experience from the beginnings of tactile play and exploration of the natural world to organised and structured resources for science and the digital technologies.  We are developing concepts such as “Power trays’ for storage and recharging of digital devices alongside industry partners and we are enthusiastic co-founders of “Learning Rooms” which challenges outmoded ideas about the learning environment to provide a more stimulating and positive experience for all children.

Taking this philosophy a step further into the public spaces of schools with Gratnells Stage is an exciting venture for us.  We have a system which is well designed, versatile and affordable and we expect it to enable more children to produce, present and perform as part of a fully-rounded education.”

He points to a fulsome 2010 report undertaken by the EPPI Centre (Institute of Education, University of London) on behalf of the Department for Culture, Media and Sport, Arts Council England, English Heritage, Sport England and the Museum Libraries Archives Council.

The report, which carried out ‘a systematic review of empirical research on engagement, impact and value in culture and sport published in English since 1997’, concluded that participation in structured arts activities had measurable, positive outcomes for children in academic attainment, early literacy skills, cognitive abilities and transformable skills.  All this, as well as the sheer joy children get from participation in the activities.

The report draws on a broad range of studies from across the globe, including both the American and Asian continents.  The studies vary from the macro overview to very specific activities, for example one in Hong Kong which evaluated an extra-curriculum, multi-component creative drama project involving puppet making.

While the pressure is undoubtedly on schools to concentrate on what the DfE calls “a core of academic subjects; English, maths, history or geography, the sciences and a language” education specialists such as Darren Henley have made a continuing case for the role of Cultural Education within that context.

In his independent review for the Department of Culture, Media and Sport and the Department for Education entitled ‘Cultural Education in England’ he says, “At its best a sound cultural education should allow children to gain knowledge

through the learning of facts, understanding through the development of their critical faculties, whether as an active participant (creating a piece of art or craft, reading a book, making a short film) or actively experiencing an event or place.  Visiting a heritage site, gallery or museum, seeing how a building works, watching a musical, dance or film performance can be habit forming for the rest of a young person’s life.

Here the author is making an even broader case for a fully rounded education, going beyond the benefits to the performers to include the watchers of the event.  Performing arts has value for the participants but also the audience.

Facilitating performing arts is part of the Gratnells mission and Murray Hudson says that too extends beyond the performers.

“Presenting any ‘live’ activity is a collaborative project.  Staging is a fundamental part of the process which includes sound and lighting, scenery, costumes, direction and production.  The stage itself offers that extra dimension of focus and attention which makes it all work.”