Technology in the Classroom

The most common strategy in schools today is for pupils to access technology at the point of need. Rather than walking down the hall to an ICT suite, pupils now have the option to take a laptop from a trolley or a netbook from a storage slot in the cupboard, and bring it back to their desk. This increases the time available for learning and more realistically reflects the way the pupils use technology at home.

In schools where space is increasingly at a premium, lines of desktop computers taking up wall space in classrooms are becoming obsolete. There is still a strong case to be made for one or two computers in a classroom, for example for bandwidth-heavy film editing and viewing that wi-fi might not handle smoothly, but the more common solution is the mobile one. Some schools are adopting a mixed economy approach to devices – meaning a number of different devices are available rather than multiple sets of the same device – to ensure pupils identify and make carefully thought out decisions as to which is the most appropriate device for the work they are doing. The potential for some of these devices to connect to the display screen by WiFi allows pupils to share work from wherever they are and provides an immediacy to feedback. 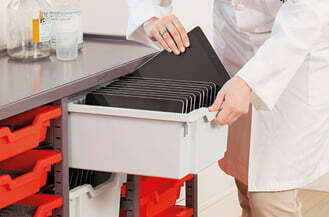 The increasing application of tablets in some schools is reducing the number of other devices that are needed. More pupils are using tablet devices to film, take photographs, and time events than ever before, which reduces the amount of varied equipment that needs to be stored locally in the classroom.

Whatever the device solution, all these items will need storing and charging. As devices get smaller and more efficient, the lumbering laptop trolleys that dominate rooms are being replaced with much smaller versions or counter mounted charge units. These can be mounted in fixed walls and as a result kept neat and secure. Ideally, these mobile devices storage and charging units will continue to get smaller and more efficient into the future, freeing up even more space within the classroom.

Whilst interactive whiteboards have become ubiquitous across UK schools in the past ten years, an increasing number of schools are now seeing the benefits of replacing them with either interactive projectors or large digital display screens (e.g. televisions). Digital screens are often easier for all pupils to read, having the benefit of fewer issues caused by glare from the sun and higher screen definition. Ultra short throw interactive projectors are neat to install and minimise shadow when the board is being used.

Digital screens can be connected to devices to allow the teacher to move anywhere within the classroom whilst still working on the board. Programmes also allow the teacher to connect to a student device and display it on screen, encouraging celebration of good work or collaborative constructive feedback.