This activity was created as part of a Gratnells What’s in my tray? CPD workshop for secondary science teachers and technicians to support practical work and delivery of the curriculum. It can be carried out as a stand-alone activity for students or combined with other activities from the session to form a STEM carousel. If you would like to find out more about running this activity as part of a carousel, take a look at the CPD Workshops section of the Gratnells Learning Room website where you will find further details and example carousels. 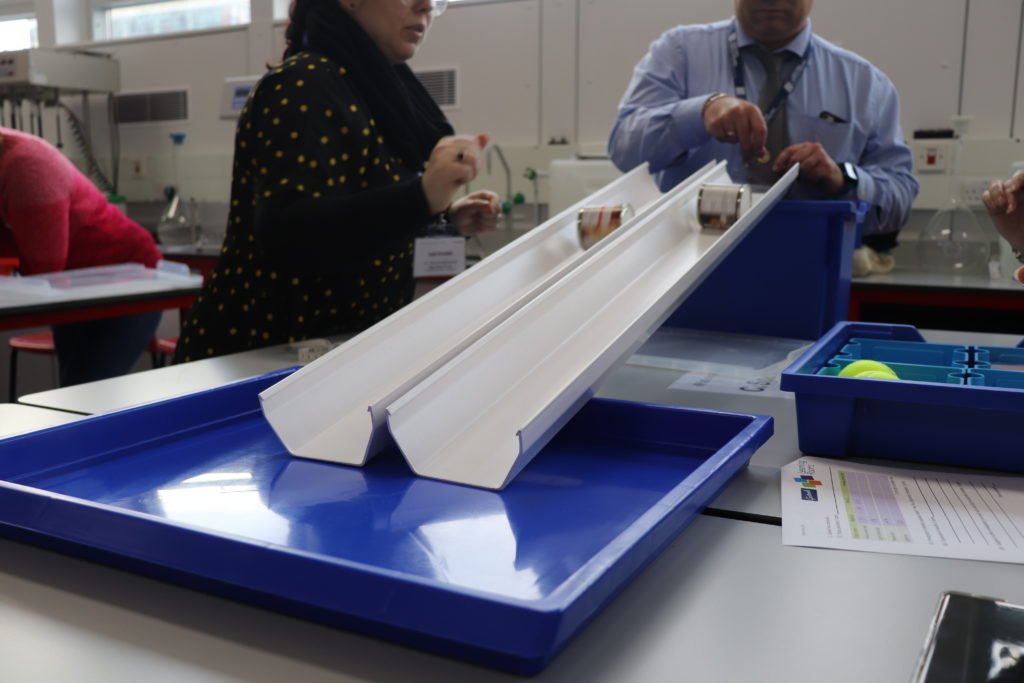 Investigate forces and motion by performing your own experiments. Take pictures or video to capture your work

You will be able to:

*Tips: If you don’t have access to square guttering, the channels can be made from folded lengths of cardboard, just make sure your two channels are identical to keep this variable constant. We used Tesco’s small cans of evaporated milk for our cans, any other small liquid filled can would work.

This activity also works for individuals or smaller groups, just increase the amount of time allocated to complete it. Once prepared, this activity can be repeated multiple times, reusing the same equipment for each group. 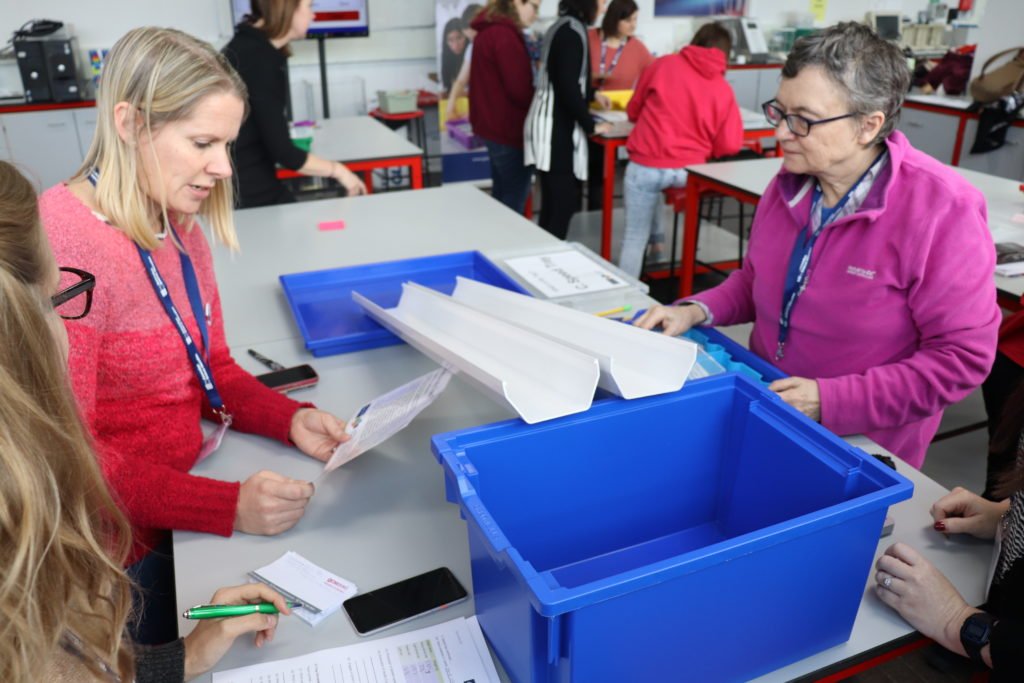 Q1. What do you notice about the pairs of matching objects?

They are the same shape and size, but one is heavier than the other / they have a different mass (1 point)

Q2. Race prediction. The heavier object (highest mass) will travel faster and hit the back wall of the bottom tray first. Or any other prediction. (1 point)

Check the completed table. An example is not provided here because the weights and speeds will differ depending on the tennis balls and cans used. Do a test run with your equipment prior to the students taking part so you have a representative data set for your own equipment. (1 point per completed row)

Q5. Suggest a further investigation you could carry out using this equipment (1 point)

Does increasing the potential energy increase the speed? Raise the hight of the slope and repeat the test. (Or any other feasible suggestion).

The equipment set up allows the following ideas in physics to be explored with the students:

Gravity is the force that ‘pushes’ everything to the ground. Gravity acts on the objects and ‘pushes’ them down from the top of the channel to the bottom when released. Participants observe and record the effect of mass on the speed of an object travelling down a slope of a known length. The heavier an object is and the higher it is from the ground, the more potential energy it has. Height and gravitational potential energy are directly related meaning if one doubles, so does the other. Under the force of gravity, potential energy is converted into kinetic energy. An object with higher mass has more potential energy, this generates more kinetic energy during rolling resulting in a faster speed (higher velocity). The objects stop in the bottom tray because the forces are in balance again, i.e. the force of gravity is equal to the upward force from the earth/tray.

What is speed? Speed = Distance ÷ Time and can be calculated from your readings if you know the length of the channel including the distance to the back wall of the shallow tray. Participants should use the measuring tape to measure the distance travelled and use this with their stopwatch data to calculate speed.

What is velocity? Velocity is speed with a direction. The force of gravity acts on the objects travelling down the guttering to create velocity. The velocity generated by the object as it rolls down the slope provides the momentum required to carry the object over the flat surface of the tray until it hits the back wall of the shallow tray and stops. Momentum doubles as velocity doubles.

As with all Gratnells Learning Rooms What’s in my tray? activities, you should carry out your own risk assessment prior to undertaking any of the activities or demonstrations. In particular, risks from collisions and needles should be considered. 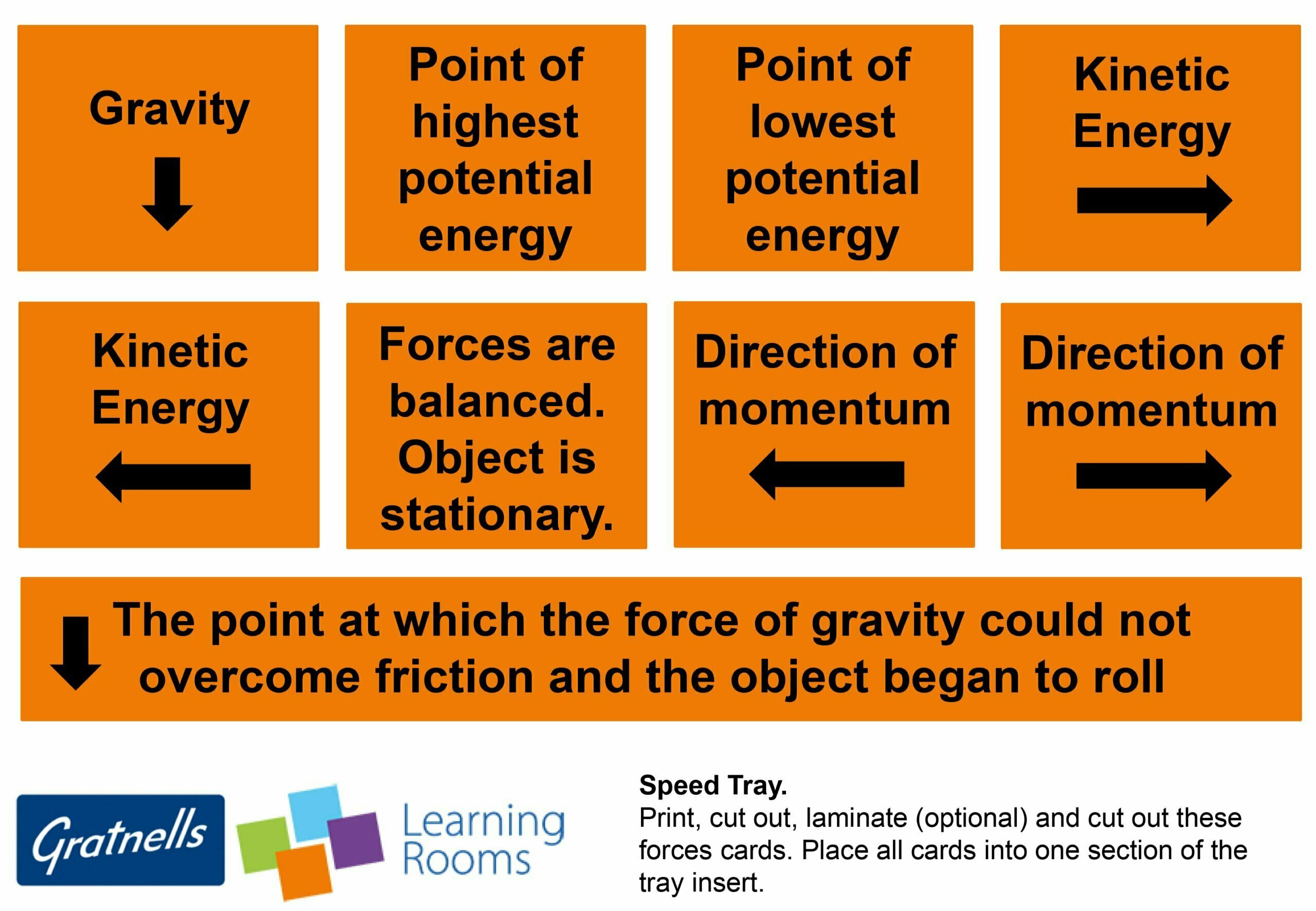