Are you sitting comfortably?

Sound ergonomics are not merely a ‘nice-to-have’ — they are intrinsic to good body and brain function both inside and outside the classroom, writes James Clarke.

Don’t be fooled by seats that simply claim to promote good posture because posture and ergonomics really mean two different things. Posture tends to refer mainly to how we hold our body, whereas sound ergonomic principles (whilst clearly impacting positively on your muscular-skeletal wellbeing) affect your cardio-vascular system too. This, in turn, has an impact on cognition. This was first proved in the first few years of the twenty-first century by the German ergonomist Dr Dieter Breithecker. 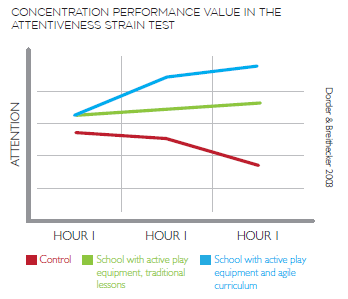 In a four-year academic study (“The Educational Workplace” What the “classroom of the future” will look like. Breithecker et al 2005) he proved that when the body is mobile, cognition improves. It shouldn’t have been a surprise, because in all other walks of life we’re told to be active: we’re even told to walk up and down the aisle of a plane on a long-haul flight rather than sit for hours on end.

Breithecker subsequently collaborated with German manufacturer VS in the design of their Panto Swing Chair. Together with the more recent Hokki stool, these designs actively promote movement, and therefore increase opportunities for concentration. Even when seated, the correct relationship between your thigh and abdomen — one where your internal organs are not constrained, isn’t the 90 degrees that sitting upright with your upper legs horizontal implies, but nearer 120 degrees – as if you’re riding a horse or a bicycle.

Your ‘vital’ organs, mostly located in your lower abdomen all have arteries running through them, and if they’re in any way constrained, oxygenated blood is hindered from circulating around the body and ultimately getting to the brain, and that, in turn, clearly has an effect on cognition. When a student leans back on their chair, they’re simply creating this wider angle. They’re not being naughty, but demonstrating one of the body’s natural, instinctive reflex reactions.

A little bit of history

In part, the misunderstanding between the correct angle between thigh and thorax can be traced back to American industrial designer Henry Dreyfuss. In 1959, he published The Measure of Man — a publication that became a seminal piece, referred to by furniture designers for years to come.

In it, he measured the human frame, including different statures and builds, and determined a set of ‘average’ measurements of the human form: the length of your lower leg, how far you can reach etc. However, his measurements relied on arbitrary angles between various parts of the body which in turn had a significant, if invisible, impact on how the body works.

For example, the 5° backward incline in the seat that he shows in many of his diagrams in fact traps the popliteal artery that runs along the back of the knee. If a chair does have a full seat, as in Learniture’s Acclivity seat, it’s imperative there’s a ‘waterfall’ edge to the front to ensure that artery is not trapped.

In the 1980’s, there was a trend for ’Alexander Technique’ kneeling chairs to solve these issues. Whilst this did bring the knees below the hips (good) it also transferred our body weight onto our knees too (bad) and did little to improve blood flow (also bad). Users frequently complained of housemaids’ knee! 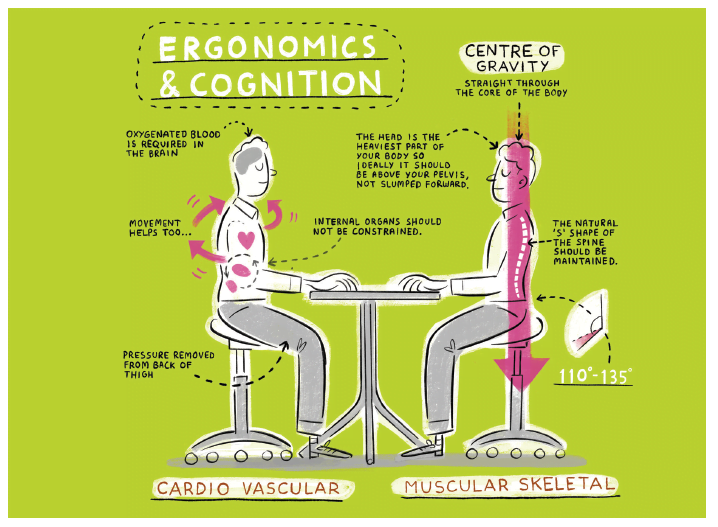 There are a number of solutions in addition to VS’s Panto Swing and Hokki. These include the Labofa Ray chair (available in the UK from Spaceoasis), HÅG’s Capisco, Vitra’s TipTon, Acclivity and Turn & Learn from Learniture UK. In Australasia, you also have Furnware’s Bodyfurn chair.

All incorporate sound ergonomic and anthropometric considerations in their designs. And all accept that the phrase “sit still and concentrate” should be banished to the annals of history because largely, it is a contradiction in terms.

Fidgeting children are frequently described both as being distracted and distracting, when in fact they’re simply doing what their bodies do naturally — move.

Surely that’s something we should embrace?

James Clarke is Divisional Director of Learniturewww.learniture.co.uk and is a contributor to Planning Learning Spaces book