Gratnells – the science of storage

Based in Harlow, Essex and working from a manufacturing complex that is one of the most advanced and modern in Europe, Gratnells has been a provider to the education sector for more than 40 years.

During the last decade, the business has evolved from being an agile and efficient manufacturer of storage systems to a real and innovative force in the wider sphere of education, summed up by the driving philosophy of the company called “Gratnells Learning Rooms”.

Gratnells Learning Rooms as a concept recognises few limits or boundaries in its ambitious scope.  From basic building blocks of the well run school such as efficient storage and science preparation areas, it extends beyond the confines of the classroom into a school’s community areas, its grounds and even to the great outdoors beyond.

In the secondary science sector, from its support for science technicians to the scope of its partnership working with the likes of Fischertechnik, Matrix, Raspberry Pi and Dulux, Gratnells provides much of the resource, ideas and inspiration which will determine the environment for secondary science in the future.

This approach recognises the secondary science sector as a fundamental area of importance and Gratnells’ commitment to it is apparent through its long-term sponsorship of the Science Technician of the Year awards, an annual event which recognises the key role science technicians play in the effective work of the department. The awards have both a UK and an international dimension, with separate groups of entries judged to produce winners in each category, with nominations coming from as far afield as the Middle East, Australasia and the USA.

Dr Katherine Forsey is one of the UK’s leading outdoor education experts and also works within schools to support creative curriculum development.  Alongside recommended fellow educationalists such as Professor Peter Barratt and Gareth Long she is a regular contributor to Gratnells Learning Rooms initiatives and will be the presenter at the 2016/2017 Science Technician of the Year awards, to be held in the National Science Learning Centre at York University in July this year. 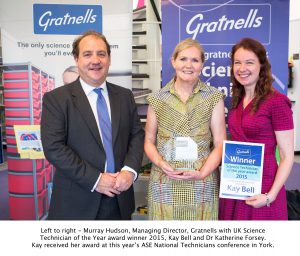 To help meet school requirements for their science storage areas and in so doing, contribute to the effective running of the curriculum, Gratnells employs some science of its own, with the availability on its website of 3D planning software.  This contains all the standard items needed in a prep room such as frames, trolleys, trays and tray inserts. What’s more, visitors to the site can view the plans in three dimensions and see exactly how the area will look, using an easy drag and drop method to create a fully functional science storage layout in rapid time.

One of the most important aspects of Gratnells’ operating policies is the continuity of design and compatibility of all the elements.  The patented Gratnells tray design has become an icon of the schools sector, with more than 20,000 schools in the UK using it.  Racks, furniture and trolleys are all designed in harmony with this to offer complete scalability of systems – an approach that delivers economies of scale, rapid expansion of facilities and certainty in sourcing product that will not become obsolete.

Bespoke science products such as the Callero Plus trolley and PowerTrays/PowerTrolleys offer further examples; taking simple principles of smart, efficient storage into the digital era and offering design innovations such as added stability, movable StopSafe runners, enhanced standards of hygiene – all ‘on the move’ between storage areas, labs or prep rooms.

The two new ICT products, PowerTray and PowerTrolley, are designed to store, charge and sync up to 30 USB devices at ultra-fast speed.  In the age of almost ubiquitous digital use among secondary school students they offer a secure and efficient addition to the benefits of digital education. PowerTrays continuously analyse the appetite for power from USB electronic devices such as phones, tablets and data loggers, responding with an optimised rate of charge and syncing between them.  The units have integral fans and air vents to maintain an optimal temperature.

These radical yet practical changes to the Gratnells portfolio are some of the ideas which offer a view into the Gratnells Learning Rooms philosophy.  There are also much wider issues of colour, space, light and layout which the concept takes into consideration.

The high quality of Gratnells products has always been a fundamental of the company’s business proposition and its partnerships with other global businesses is an indication of the level at which the company operates.  Fischertechnik, for example, with its production HQ in Salzsetten, Germany is a customer for some 40,000 black Gratnells trays a year, housing the STEM kits which help schoolchildren form a basic understanding of technology, along with the development of logical thinking, creativity and fine motor skills.  These kits may be used up to 1000 times a year by teachers, hence the need to provide a robust, reusable storage medium and look good enough to represent the best brand in the sector.

As Fischertechnik’s Sales Director, Laurenz Wohlfarth, says “their products are manufactured to the same exacting standards as ours and that’s why we specify them”.

The strength of an “idea in a tray” is extended to broader applications within Gratnells own marketing techniques.  “What’s in my tray?” is a series of practical, enjoyable projects for children up to and including secondary science where an experiment, the results of a field trip or an investigatory science project can be neatly contained in the eponymous tray. All the necessary constituent elements will be available in the tray, ready for the learner to use in kit form.

Learning spaces need to be designed with the specific functions of the area in mind but functionality and form should be considered in equal measure so that the teaching and learning of science offer the prize of discovery along with the means of getting there.  In summary, the Gratnells Learning Rooms project aims to contribute to both the ideas and their implementation, in the spirit of this extract from “Creative Schools: Revolutionising Education from the Ground Up”, by Sir Ken Robinson and Lou Aronica:

“Imagination and creativity, properly conceived, are as much a part of science as the arts.  The great discoveries and theories that have driven science forward depend on profound leaps of imagination and practical ingenuity in the design and interpretation of experiments”.